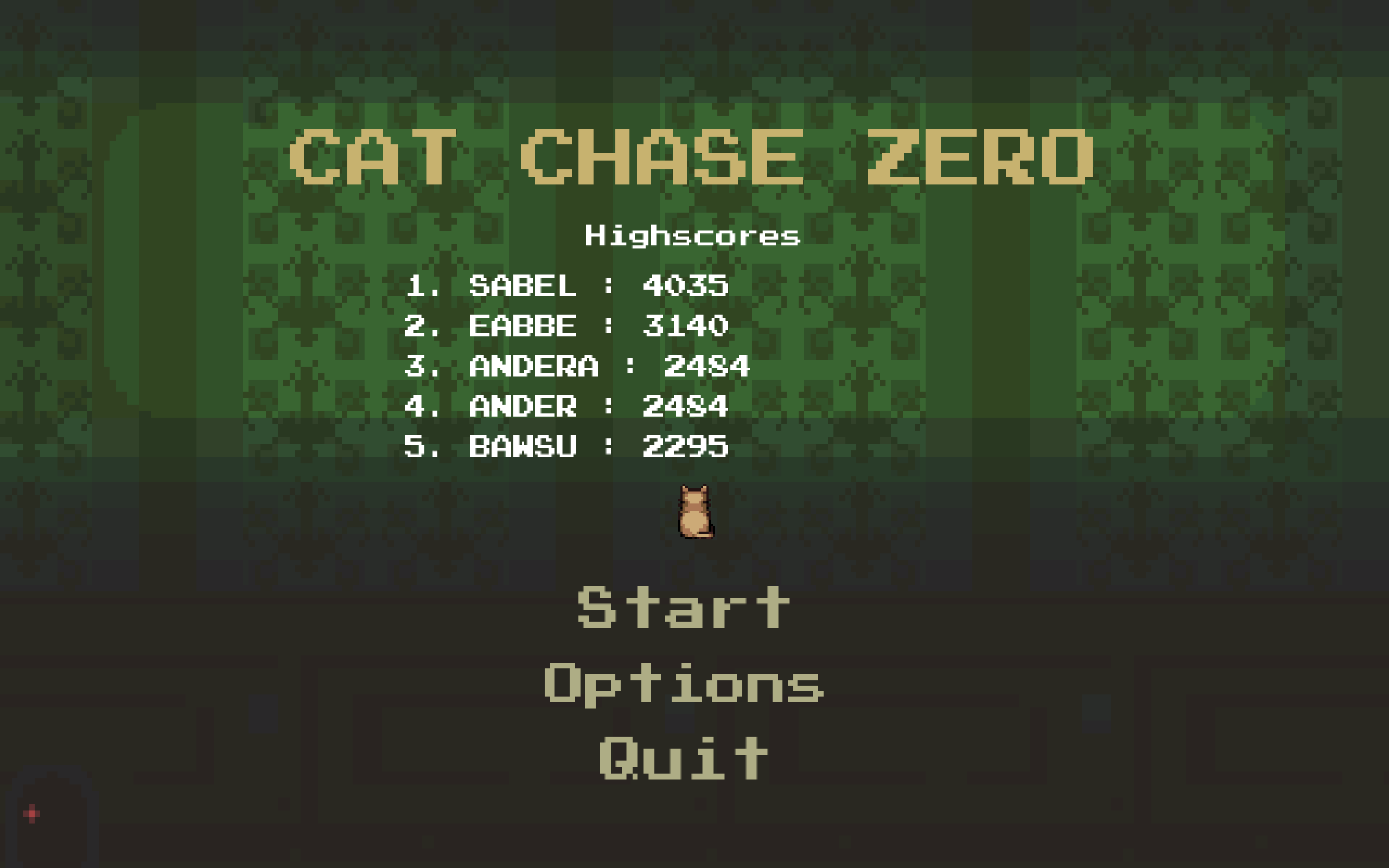 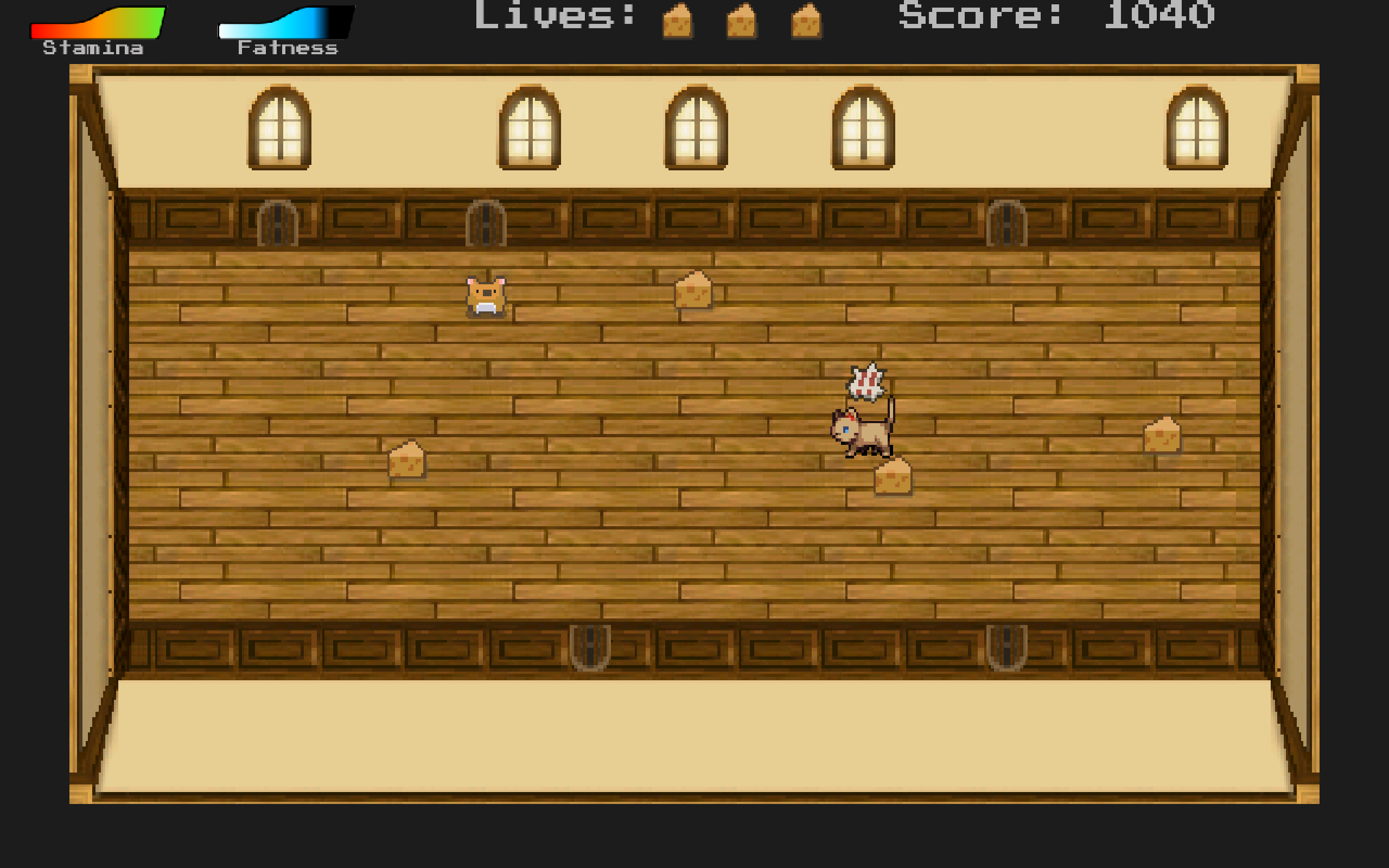 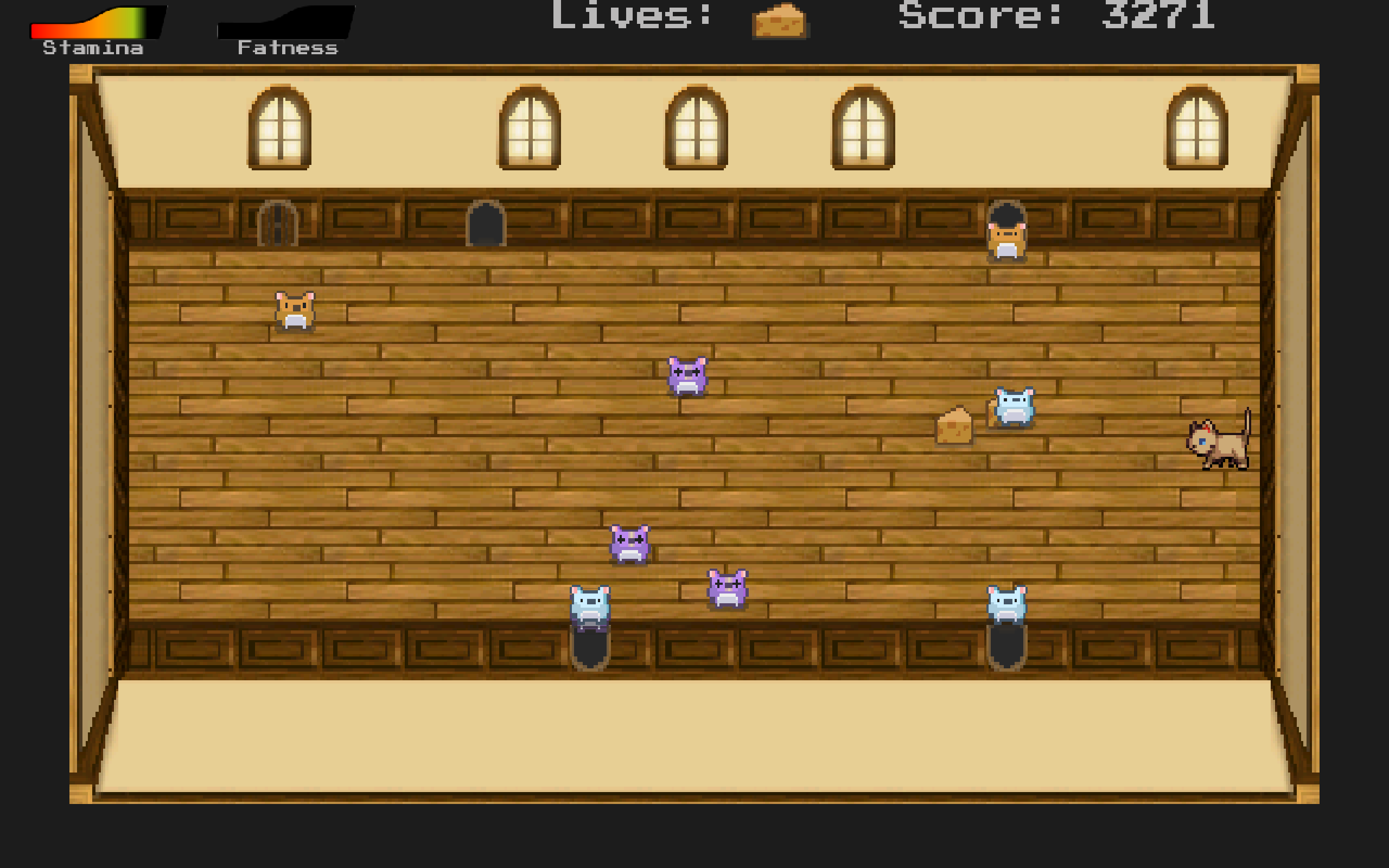 Cat Chase Zero is a Ludum Dare game jam game. The challange was to create a game that revolved around the theme of "one room". Additional elements that were focused on were game polish and retro feel.

Cat Chase Zero is a Ludum Dare game jam game. The challange was to create a game that revolved around the theme of "one room". My personal focus during this jam was to overcome the failures I experienced during my last game jam project. This meant that I would create less content but put more emphasis on creating fun and engaging gameplay. The shift on focus was positively visible throughout my workflow during the 72 hours that I worked on this game.

The rest of this project page will highlight the development workflow and some of the design descissions made along with the reasoning behind these descissions.

During the initial draft of the game I used base primitives to represent the diffirent objects in the game. This gameplay first approach enabled a much more rapid development of the mechanics until it reached a point where I personally found the game enjoyable.

Once the mechancics were mostly in place the visuals received a incremental updates as the gameplay expanded.

During the initial draft of the game two enemies were decided upon, the basic 'grunt' mouse and a faster version. These enemy types were meant to assist in the initial development of the game to get a basic feel of the gameplay and ensure the basic game and enemy logic was functioning and felt fun to play around in.

The initial two mice designs followed a principle of easy/hard variety so I wanted additional mice designs to not just be stronger or weaker iterations of the already existing enemy but to have them have their own specific characteristics that would create a more varied challenge for the player. 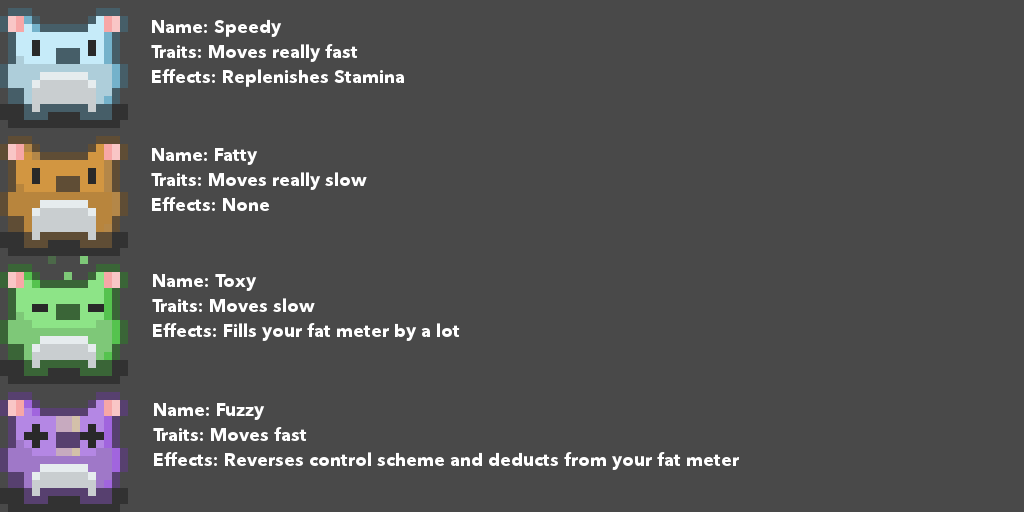 The first additional design was the green 'Toxy' mouse. In stark contrast to the previous enemies you had encountered this mouse was one that you actually wanted to avoid as much as possible. The idea was to inform the player that it might not always be a good idea to just keep eating each mouse that comes along your path but to only eat those who you absolutely have to or those that you carefully select for consumption at that time.

Flat out expecting the player to be aware if this would be unfair so once I finished designing this enemy I modified my wave spawning code to create a sort of tutorial wave each time a new mouse type would be presented so they could interact with the enemy and see what happened without really risking any lives. An additional visual indicator in the form of exclamation marks above the players head would serve as a heads up to tell the player to pay closer attention.

For the fourth mouse design I spent some time thinking on how the enemy could give some added value to the game. I wanted to design an enemy that would behave in a noticeably different way. The final design that I settled on was the purple mouse 'Fuzzy'. In contrast to the other mice, Fuzzy would actually help your digestion and reduce the amount of fat for the player. Since the amount of fat would be reduced the player would, in most cases, gain a significant speed boost making this enemy act more like a powerup. While I personally liked the idea, it would make little sense for an enemy character to only bring the player benefits without really getting in his way.

In order to offset the benefits Fuzzy would bring I had to come up with some kind of negative aspect to eating him and since his design was already based around doing the inverse of what the other enemies did I thought it would be a funny handicap to inverse the movement controls for the player until he ate another mouse. The end result was a really fun experience. By giving the player a sudden boost of speed he would really experience the brief momement of disorientation that came with eating Fuzzy, forcing even experienced players to keep on their toes in the later stages of the game.

When working on a game that is on a tight deadline it is inevitable that certain designs and ideas will have to be cut. Working with this in mind helps focus on the designs that add the most value to the game, or in some cases the designs that you expect to be able to fully implement before the time is up. This is especially true during a gamejam when the scope of your content is extremely limited and failing in your attempt to implement that one super amazing and interactive enemy could result in your game having no enemies at all.

Cat Chase Zero is no exception to this rule, during the early stages of development I quickly came up with the idea of having both day and nightime levels, as well as additional enemies that would be able to use the diffirent setting to their advantage.

When I laid out my plain for the implementation of all of these concepts I came to the conclusion that creating double the amount of art and implementing radically different enemy patterns would simply take too much time. Realizing this enabled me to focus on streamlining the gameplay and user interface, as well as working on the inclusion of a simple highscore system that would hopefully spark the competitiveness in players to stay on top of it. The implementation of these features cost me less time than additional content but made the gameplay that I already have feel much more finished.