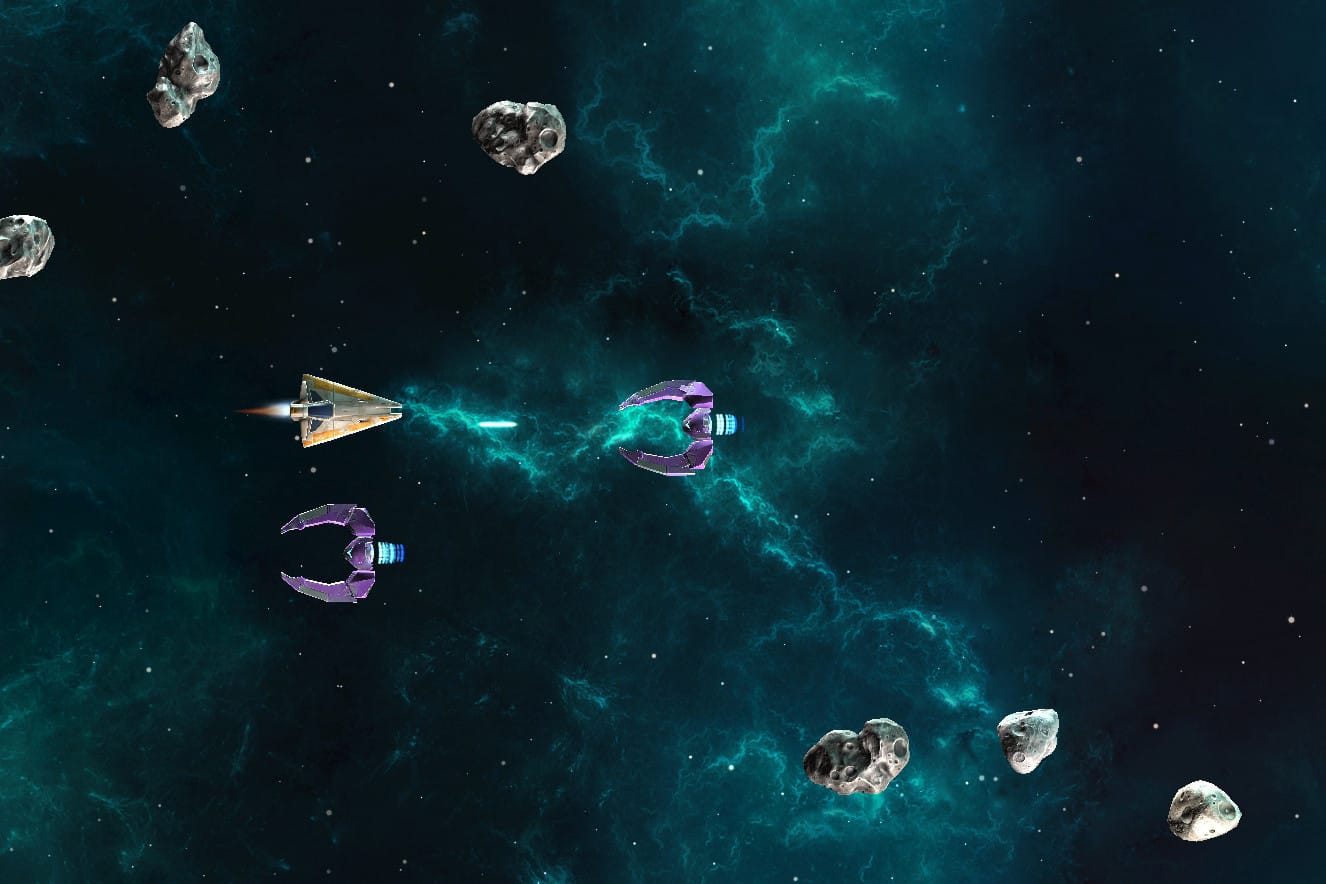 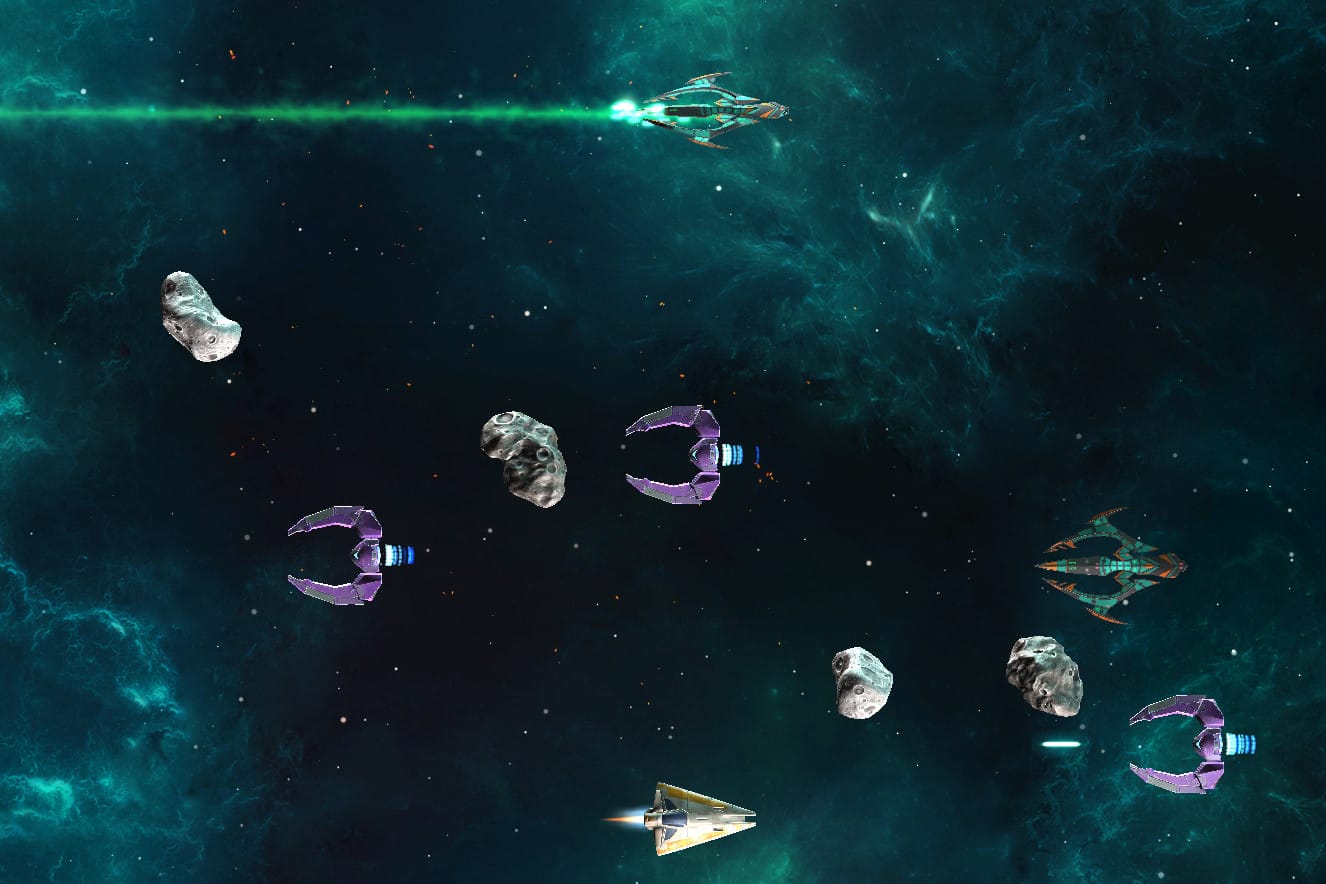 The Trident slowly walls in the player 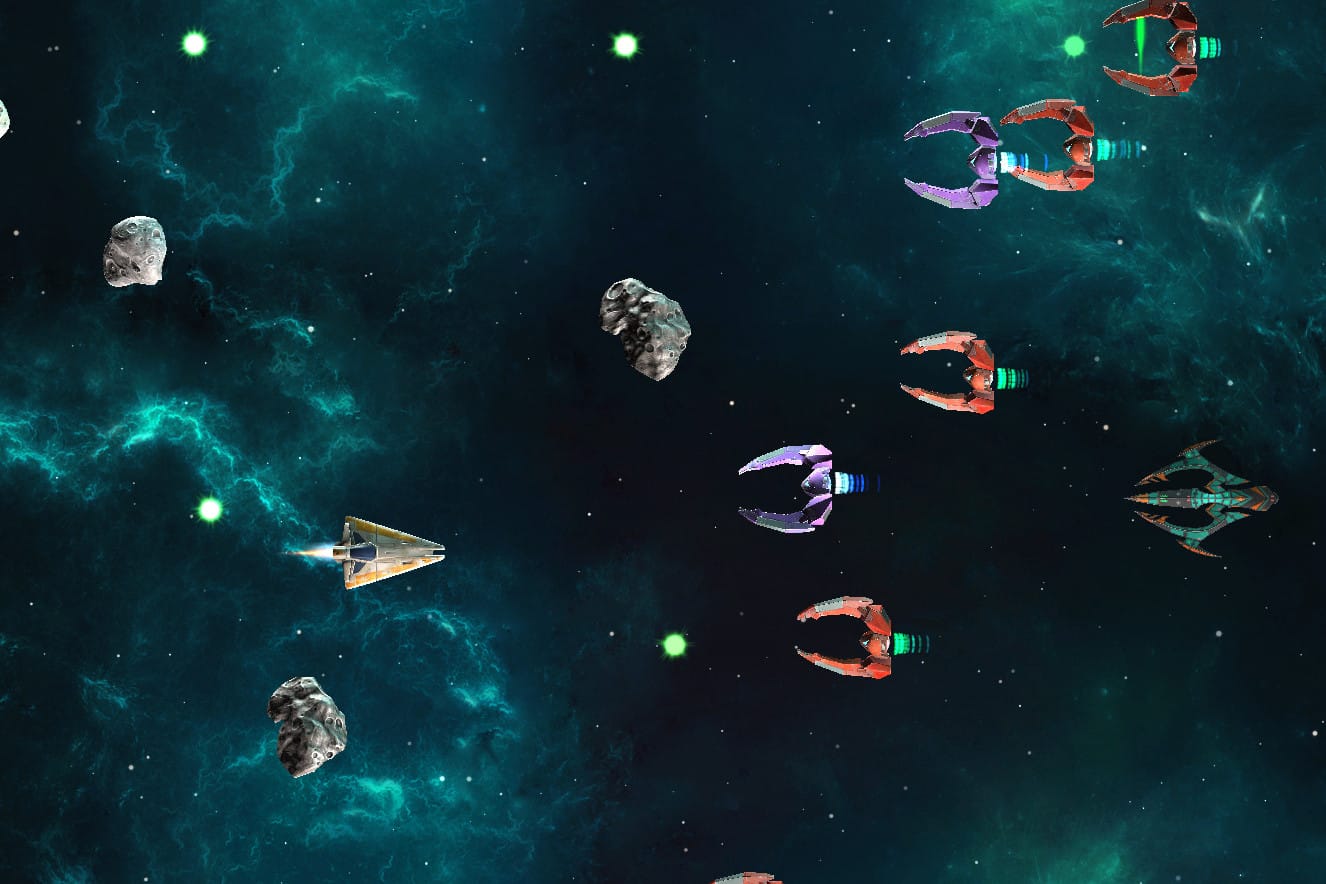 The player besieged on all sides
Previous Next

Space Shooter is an Astroids style game based on the Unity Space Shooter tutorial. This work is an attempt to take the tutorial several steps further by implementing a proper UI as well as adding more enemies and additional game mechanics.

Space Shooter initially started out as an attempt to familiarize myself with the development proccess for mobile platforms through the use of the Unity space shooter tutorial. I soon learned that the contents of the tutorial were rather basic and did not enable me to really use the tools to the extent that I wanted. In an attempt to further my learning I decided to set some extra design goals that resulted in this asteroids style game.

The rest of this project page will highlight some of the changes I have made along with some reasoning behind my choices. 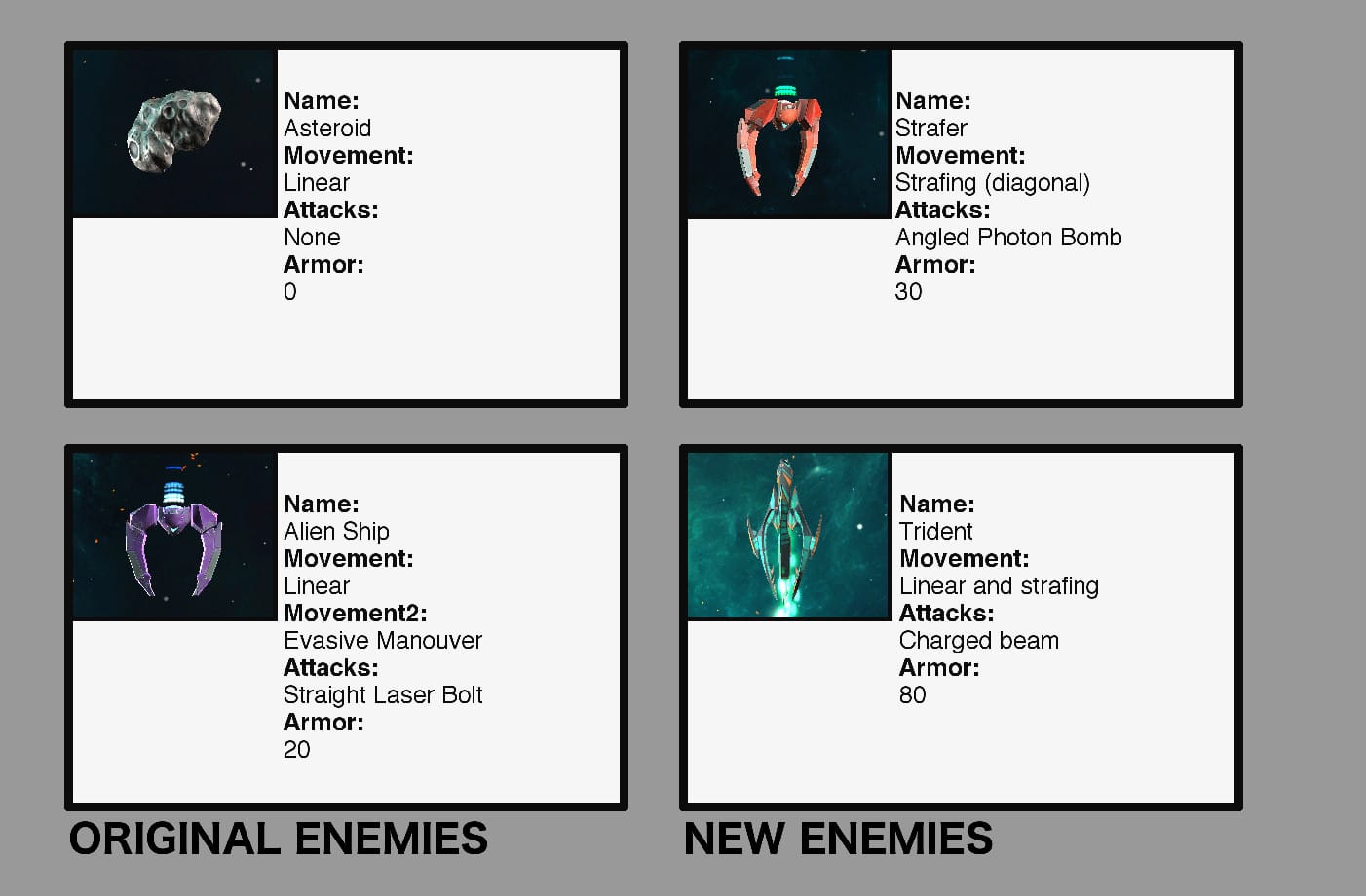 The initial space shooter came with two standard enemy types to challange the player. The first asteroid enemy basically served as an obstacle that the player either needed to avoid or could destroy for points. Since the movement of the astroids was linear it helped serve as an introduction for the player as to how he could perform basic movement. This enemy was soon followed up by the alien space ship that would fire back at the player at some random interval. While the player now also had to worry about enemy projectiles, most of the enemy movement paterns remained relatively linear.

The first dificulty ramping I wanted to introduce was the notion of non linear movement. This would keep the player more on his toes. This objective was achieved by introducing an alternate alien space ship that strafed diagonally across the screen while firing slow moving but heavy hitting projectiles. To avoid creating the same linear movement pattern in the projectiles I added the current directional thrust of the enemy to the projectiles to create spread out attack patterns. 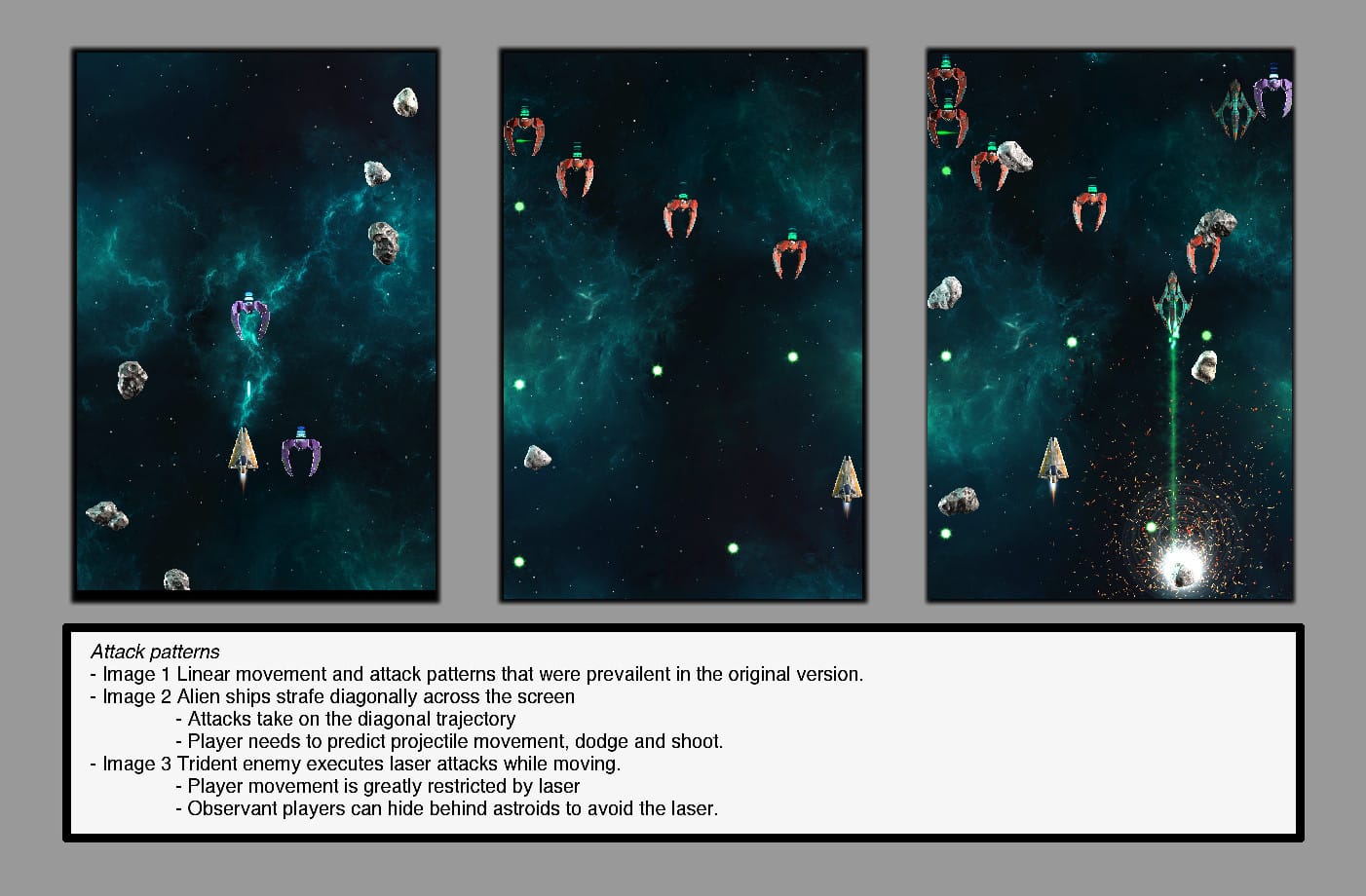 An additional level of complexity was implemented by introducing a health system in the form of armor. The player would start out with 100 armor that could be depleted in order to destroy him, this enabled players to learn more from their mistakes instead of outright losing the game on a single miss. Likewise enemy units also had similar enhancements to make certain types of units more durable. In the case of the Trident unit, the large amount of armor served as compensation for the long charging time of their attack. By using a clear animation for the charge, the player would be induced with a certain sense of urgency to quickly take down the Trident before it could cause him serious damage. 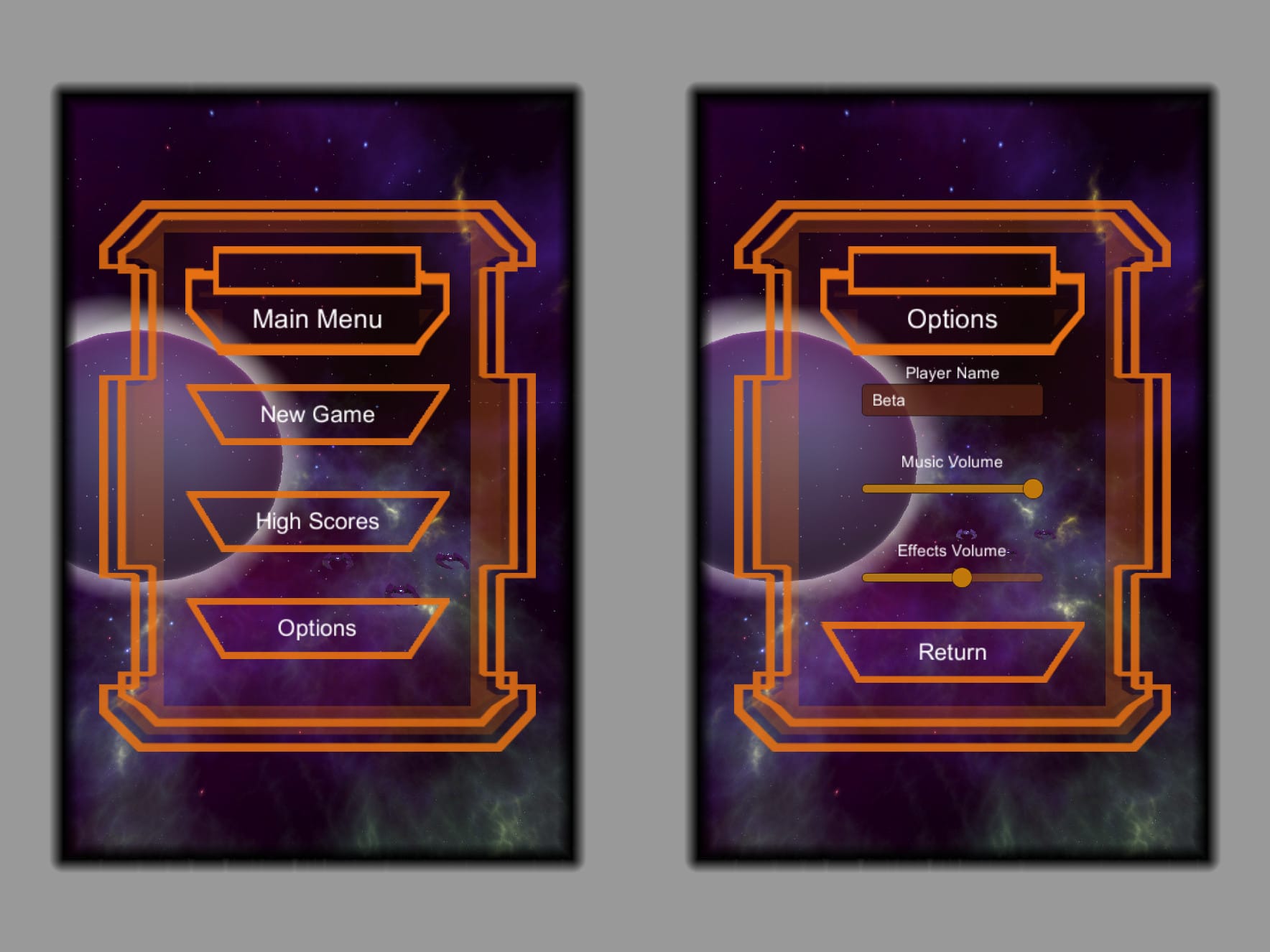